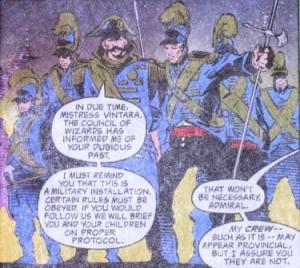 The Anglo-Spanish War (1585–1604) is the name given to the conflict that eventually led to the climactic battle between the British Royal Navy and the Spanish Armada in the reign of Elizabeth I.  Divided over religious differences, relationships between Spain and England deteriorated over the course of Queen Elizabeth I’s reign as England and Spain came into conflict over various colonial interests.

In 1588 a fleet of 130 Spanish ships sailed against England’s fleet of 200 ill-supplied ships.  Although outgunned, the English Navy’s superior maneuverability (facilitated by the newly-designed full-rigged ship), and superior seamanship, drove them back to Calais after several pitched battles.  There they were to wait for the army of the Duke of Parma.  But first, the British Navy divided into four separate groups to pursue them; and then their Dutch allies in flyboats blockaded them at Dunkirk.  Their protective crescent formation was broken by English fireships, and they were further decimated at the Battle of Gravelines, when the English fleet, aware of the limited supply of Spanish gunpowder and of the superiority of Spanish marines, continually fired at a distance and maneuvered away, which effectively destroyed the fighting prowess of the Armada.

As they tried to journey home in the North Atlantic, the Spanish were further beleaguered by navigational error, terrible storms, and starvation, especially after they were driven ashore in Ireland.    Only 67 ships and fewer than 10,000 men survived. Many of the men were near death from disease, as the conditions were very cramped and most of the ships ran out of food and water. Many more died in Spain, or on hospital ships in Spanish harbours, from diseases contracted during the voyage.  In the meantime, there were only 50 to 100 dead English sailors and about 400 wounded.

Under the command of Sir Francis Drake, Her Majesty Elizabeth I eventually launched the Counter Armada, with the aim of further hindering the Spanish and fronting a Spanish uprising, but poor intelligence and good planning on the part of the Spaniards resulted in a sort of “petering out” effect in the attempt to raise the insurrection, and eventually, Drake was required to limp home with his tail between his legs.  The fortunes of both sides continued to fluctuate until the signing of the Treaty of London in 1604.

In the First Unhuman War, the goblinoid forces were outnumbered by the elven forces, but based on a tactical analysis of available firepower in a given scenario, possibly outgunned the elves; and certainly, with ogres and hobgoblins aboard, they would have made superior marines.  However, elven ships are among the most maneuverable in the Spelljammer universe; and when you consider their superiority in the magical arts, they can generally sail circles around goblinoid vessels – which is effectively what the English did to the Spanish Armada.  A combination of mismanagement on the part of the commanders and bad luck also led to the defeat of the goblinoids, but the elves were no more successful at destroying them than the English were at destroying the Spanish.  The eventual surrender of the goblinoids was more due to ongoing attrition than a decisive Naval action.  Also, the Treaty of London, which ended the Anglo-Spanish War and was implemented by Elizabeth I’s successor James I, represented a significant betrayal of England’s allies, the Dutch.  This could be likened to the betrayal of the bionoids following the end of the First Unhuman War.

Uniform of the British Royal Navy during the Napoleonic Wars.

To any fan of Patrick O’Brian or Horatio Hornblower, or any student of Naval history, it should be fairly obvious that the Second Unhuman War was an allegory for the Napoleonic Wars.  This conflict, sparked by Napoleon’s rise to power in France in 1799, began in 1803 and ended in 1815.  The burgeoning French Empire and the British Empire contested mainland and colonial interests; and while there were many land battles with vast armies, it was the nautical conflicts that decided the course of the war.

It bears mentioning that Napoleon’s rise to power was facilitated by the fact that the newborn French Republic, in the wake of the French Revolution, were continually targeted by surrounding nations who wished to prevent their commoners’ uprising from spreading; one of which was England.  In this, one can see a parallel in Dukagsh’s rise to power in response to (perhaps perceived) continued elven aggression.

“The ideal Napoleonic battle was to manipulate the enemy into an unfavourable position through maneuver and deception, force him to commit his main forces and reserve to the main battle and then undertake an enveloping attack with uncommitted or reserve troops on the flank or rear. Such a surprise attack either would produce a devastating effect on morale or force him to weaken his main battle line. Either way, the enemy’s own impulsiveness began the process by which even a smaller French army could defeat the enemy’s forces one by one.” – Donald M.G. Sutherland, The French Revolution and Empire: the Quest for a Civic Order (2008).

This approach is echoed in the guerrilla warfare tactics of Dukagsh and the scro.

The British Royal Navy was used to Naval superiority, which it had enjoyed since the attack of the Spanish Armada.  But new technological developments in French shipbuilding, including a hull design that was considerably better enforced than that of English ships, soon challenged that.  Likewise the design of the new Scro Mantis challenged the spacefaring superiority of the Elven Man-o-War, and the Battlewagon challenged the Armada.

As the conflict continued, the British found themselves overextended; as did the Elven Navy.  Eventually much of the outcome of the war became bound up in economics (in both cases.)

The French Dominion came to an effective end with Napoleon’s disastrous invasion of Russia in 1812.  Napoleon led a massive force of 680,000 soldiers against Russia in an attempt to force them to stop aiding England’s war efforts economically, thus compelling the English to sue for peace.  However, he overextended himself.  Russia’s scorched earth warfare led the French forces into a trap, which climaxed in the terrible and bloody Battle of Borodino.  Though technically it was a victory for the French, it came at the cost of 49 generals and thousands of soldiers.  Entering Moscow proved no more effective, since the city had been evacuated and burnt, and he had no better luck in pinning the Russians down for decisive conflict at the Battle of Maloyaroslavets.  Only 27,000 fit soldiers remained to limp home after the attrition of starvation, disease and hypothermia; the Grand Armée had lost some 380,000 men dead and 100,000 captured.  The Borka Maneuver was similarly disastrous for the forces of the scro, and for the same reason of having overextended one’s resources, and committed too many troops to a single action, upon which the outcome of the war thus depended.

I encourage Dungeon Masters to research the Spanish Armada and the Napoleonic Wars to add flavour to any Spelljammer campaign!

One comment on “The Unhuman Wars as Allegories of History, Part 2”

Out with it then! Cancel reply